GRA comments on St. Mary’s Wharf consultation August 2021
Redevelopment of the Debenham’s site is being proposed by Native Land. Here is our response to the most recent consultation.
St Mary's Wharf, GRA response to Consult[...]
Adobe Acrobat document [98.5 KB]

1-5 The Quadrant, Bridge Street and the Casino Nightclub

The Quadrant - Casino Inquiry
The appeal against refusal of planning permission for the proposed development of this site (19/P/01974) opened on 2nd February 2021. Amanda Mullarkey had asked to speak on behalf of GRA, and the Inspector invited her to do so on the first morning. Her statement is attached. We are pleased to say that the appeal was withdrawn on 4th February.
The Quadrant - Casino Application Public[...]
Adobe Acrobat document [189.9 KB]

GRA response to consultation on 'Planning for the Future', October 2020

Guildford Residents Associations response to consultation on ‘Changes to the current planning system’ Sept 2020
In August the government published its proposals for changes to the way housing need is assessed. The consultation document is available via the MHCLG website and the closing date was 1st October. Our response is attached and we are grateful for input from Neil McDonald in shedding light on the implications of the proposals.
Guildford Residents Associations respons[...]
Adobe Acrobat document [119.1 KB]

The second stage of the Local Plan includes the adoption of Development Management Polices (DMPs) which will apply to development carried out in the borough, replacing those that have been in place since 2003.  GBC published the draft DMPS for consultation and GRA submitted the attached response, with the help of input from members.

The consultation draft of the DMPs can be seen  here:

A3 Guildford scheme not in government’s plans.

On March 11, the Department for Transport published its Road Investment Strategy 2 (RIS2) which covers the period 2020-2025. The scheme to improve J10 M25/A3 (with widening of the A3 from Ockham roundabout to Painshill junction) is included in the list of schemes for implementation.  The strategy also includes a list of schemes that will be prepared for implementation in RIS3. There is one A3 scheme included in the pipeline which is described as A£/A247 Ripley South. But there is no mention of a scheme to improve the A3 in Guildford from the A31 to the A320, which has been studied by Highways England, and has been seen by GBC as a key infrastructure element in the new Local Plan. GBC and SCC will no doubt be considering the consequences for the Local Plan as soon as possible.

The Solum Application to redevelop the Railway Station

Solum Station Development to go ahead

Guildford Borough Council Planning Committee voted unanimously against the Solum development, but the developers appealed against the decision.  In spite of the very large numbers of objections across Guildford and by GRA members, the appeal was won and the development will now go ahead. 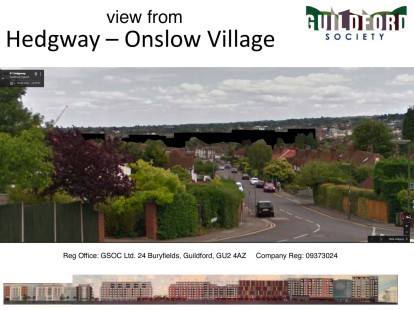